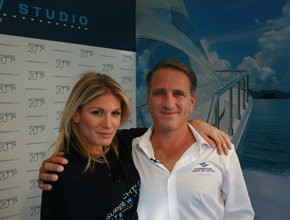 IYC Comment on the Evolution of the Monaco Yacht Show

Managing Director of International Yacht Collection, Kevin Bonnie, speaks about the evolution of the MYS and their stunning yachts, Four Aces and Bacarella.

International Yacht Collection represents a vast fleet of over 30 superyachts, offering a wide reach and a varied list of vessels for any client’s specification. At the Monaco Yacht Show we caught up with Kevin Bonnie to talk about the 20th edition of the Monaco Yacht Show. Kevin said, “The Monaco Yacht Show has evolved over quite some time … There is about 120 yachts anchored outside Monaco, so it’s sort of evolved into two different yacht shows, the yacht show inside and a floating show outside.”

Kevin Continued “When I started, the first yacht show, ten years ago, that I presented a yacht in, there were very few actual clients here. It was more of a manufacturer show to display product and a networking event for industry people”.

This year, standing testament to the shows evolution as a premier showcase for the worlds finest superyachts, IYC presented two magnificent vessels, the 55m Four Aces and the 60m Bacarella. The Benetti-built Four Aces was a new acquisition for brokers Noel Vawter and Mark Elliot, signed earlier this month. The 60m Bacarella, launched last year, was one of a few steel hulled yachts built by Trinity, featuring an enviable Dickie Bannenberg interior.

Kevin also informed our presenter, Hofit Golan, that IYC and Trinity are responsible for three short delivery superyachts, two measuring 51m and one 57m. The 51m yachts are capable of achieving a top speed of 25 knots, only require the client’s choice of interior and then will be ready for a delivery date of less than 16 months. The 57m superyacht however will be available for delivery at the end of this year.

Expand
By B. Roberts / A. Frisby