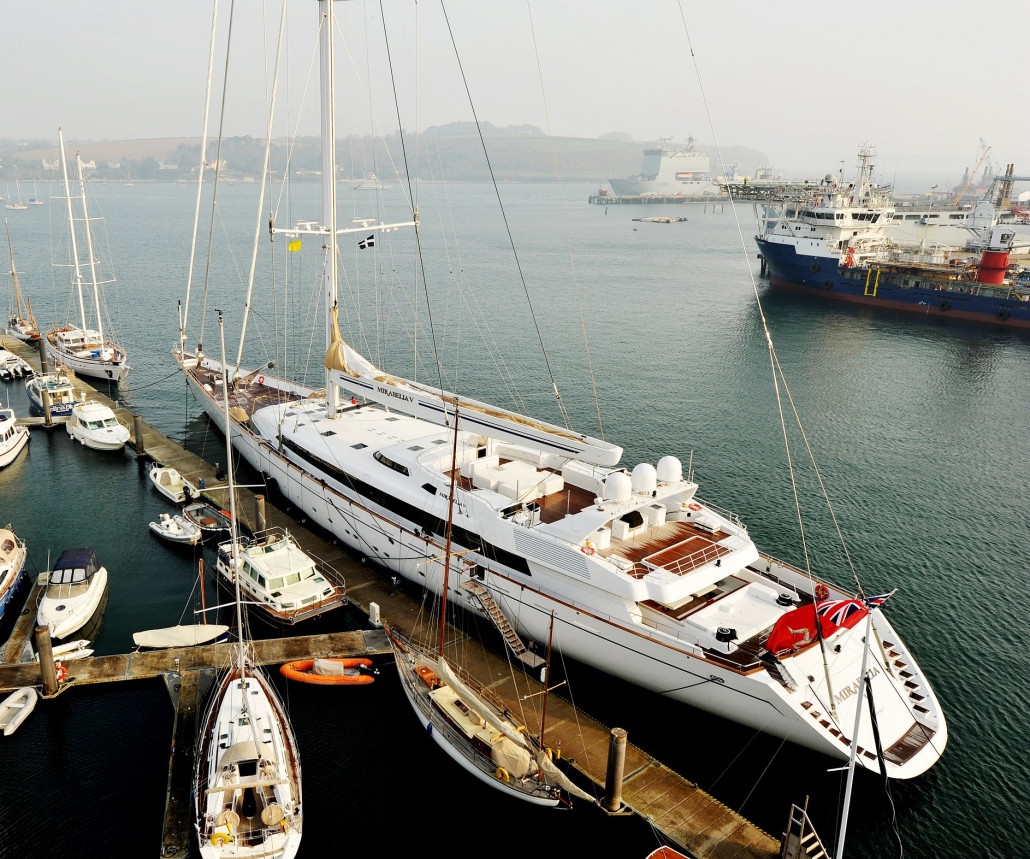 Mirabella V Arrives at Pendennis Plus for Substantial Refit

Pendennis Plus has proudly announced that Mirabella V, the largest single-masted sailing yacht in the world, has arrived at their facilities in Cornwall for a substantial one-year refit after being renamed M5.

This British built superyacht will arrive in Falmouth at the end of March, with her gigantic 90m mast due for removal before the yacht docks down during May. Stephen Hills, Managing Director of Pendennis Plus, commented “We are very proud to have been selected to complete the refit of such and iconic sailing yacht. It is through projects such as this that the superyacht industry in the UK, including our yard in Falmouth, continues to enhance its world-class reputation for exception build quality, design, finish and engineering.”

The project will become a collaboration between several esteemed UK and Ireland based companies. Redman Whiteley Dixon (RWD) have been commissioned as the interior design team, fresh from the completion of the much talked about VAVA II at Devenport Yachts. Naval Architect Ron Holland, Mirabella V’s original designer, who worked with Pendennis on the sailing yacht Christopher launched in 2011, will steer the structural improvements.

M5’s visit to Pendennis will see the stern redesigned and extended by 3m. Alongside this other exterior restyling work will include the installation of a side boarding platform. Structural fabrication of the composite stern will be undertaken by another UK based company, Green Marine, with support from structural engineers High Modulus Europe Ltd.

The interior aspects of the refit will see the main and lower decks undergo a complete restyle. M5’s main deck in particular will be completely transformed once all joinery is replaced to complement RWD’s new design. Toby Ecuyer of RWD explained their role in the project “Redman Whiteley Dixon is thrilled to join the world class team assembled to undertake the transformation of the mighty Mirabella V. It is a privilege to be working alongside Ron Holland and his team whilst we are equally proud to be working with one of the world’s premier boat yards once again. Working closely with the Owner, Redman Whiteley Dixon have developed and tailored a contemporary interior which serves to maximise on the inherent qualities of Mirabella’s architecture and expand on the magnificent opportunities she affords. With Mirabella V returning to Britain’s South coast for the start of her next chapter, there is a sense of symmetry and provenance we are honoured to be entrusted with.”

The yacht’s captain, Rocka Romke, has explained the process behind the selection of the British-based team: “The team assembled for the works are testament to the quality of the workforce and facilities available in the UK. Of course Ron Holland is very familiar with the yacht and is perfectly positioned enhance its appearance whilst remaining sympathetic to the original design. Both Pendennis Plus and RWD have established reputations as being amongst the best in their fields with experience in both the large yacht and sailing yacht sectors. I believe the collaboration between these parties will elevate M5 to be one of the most impressive and original sailing yachts in the world both in structure and style.”