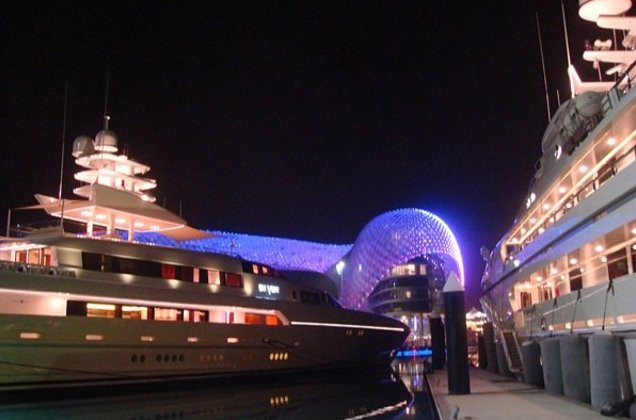 The 2010 Abu Dhabi Yacht Show took place on February 25th – 27th, ushering in more than 6,000 visitors and over 140 exhibitors. Located in the prestigious Yas Marina, the show played host to 31 impressive superyachts. Plans for the Abu Dhabi Yacht Show 2011 are already underway and dates are soon to be revealed.

The 2nd annual show held this year faced challenging weather conditions. However, the attendance of visitors and exhibitors more than underlined the potential of the show, report ADYS organisers, the Informa Yacht Group.

Representatives from major brokerage and charter firms, shipyards and design studios from all over the world assembled at the event to showcase their work. Exhibitors ranged from Lurssen, Oceanco, Amels, Blohm + Voss, Donald Starkey, Espen Oeino, Merle Wood & Associates and YPI. Just some of the superyachts in attendance were the 85m Alysia, the 41m Blink, the 61m Roma and the 65m Trident.

Phil Purcell, Vice President of Sales for respected US yacht builder Westport stated: “We really liked the new venue. A lot of effort has gone into this show and into the Yas Marina, and we commend the change in venue. We love the Middle East and the potential for growth here is immense. We want to be part of that growth.”

Commenting on the initial obstacles that the show faced, Johan Valentijn, General Manager of the Abu Dhabi MAR Group said: “The show is in its infancy but if we all work through the inevitable teething problems, then I believe that within the next 3 - 5 years, the ADYS will take a prominent role and become one of the "must attend" yacht shows in the world."

Dates of the Abu Dhabi Yacht Show 2011 are soon to be announced. The Informa Group proudly announced at the 2010 show that the chosen venue for 2011 would likely be the continued use of the exclusive Yas Marina.